- The new generation of MP series -
MP8 - The Ultimate Professional Stage Piano !!
The closest approach to the concert grand piano combined with a defining studio controller
Finished in black metallic over an aluminum body with natural wood cheek blocks and having amazing 256 built-in sounds, the MP8 will stand out as a truly professional stage piano. 192-voice polyphony and sound simulating technology bring the MP8 closer to a real concert grand than ever. A combination of slider & knob controls has been developed for greater ease of use.
Its wooden keys and mechanical action makes the MP8:
The new standard in Professional Stage Pianos!!

Unique functions to support the live performance
Assignable functions like preventing the accidental pressing of buttons on the panel, controlling external sequencer, metronome and many other ON/OFF assignments assist you with your performance.

Real sounds of acoustic piano with 192 note polyphony
Kawai set out to create the best possible piano sounds for the new MP8 and, using the Kawai proprietary process of Harmonic Imaging II, Kawai have been able to manipulate the sample data of the Kawai EX Concert Grand Piano?s harmonic structure with no less than 192 notes polyphony. In addition, there are operations that simulate the hammer regulation, the string resonance, the sound pedal resonance & reverberation when playing. Also the new accessory pedal, F-20, recognizes half-damper. In addition Kawai has refined the electric piano sounds to be compatible with any genre when performing on stage. MP8 has 8 categories with a total of 256 sounds.

Great Reverbs, Great Effects!!
MP8 has 7 reverbs and 20 kinds of standard effects built-in, which can be individually assigned to each of the 4 zones. The combination of the 4 control knobs, Effect button, EQ button, Tone Modify button and MIDI CC# button per zone on the control panel, allows you to give a much more live feeling to your performance.

Easy to handle on stage or in the studio
The MP8 has 4 zones. Each zone can individually play internal sounds, MIDI Out or BOTH. Zones can be freely split, layered and velocity switched to create stunning, personalised performances. You can save up to 256 of your favorite Setups. Also a USB port allows ease of communication with a computer during DTM. 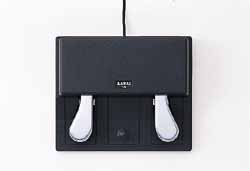 Sound examples
-
Update Required To play the media you will need to either update your browser to a recent version or update your Flash plugin.
Documents
-